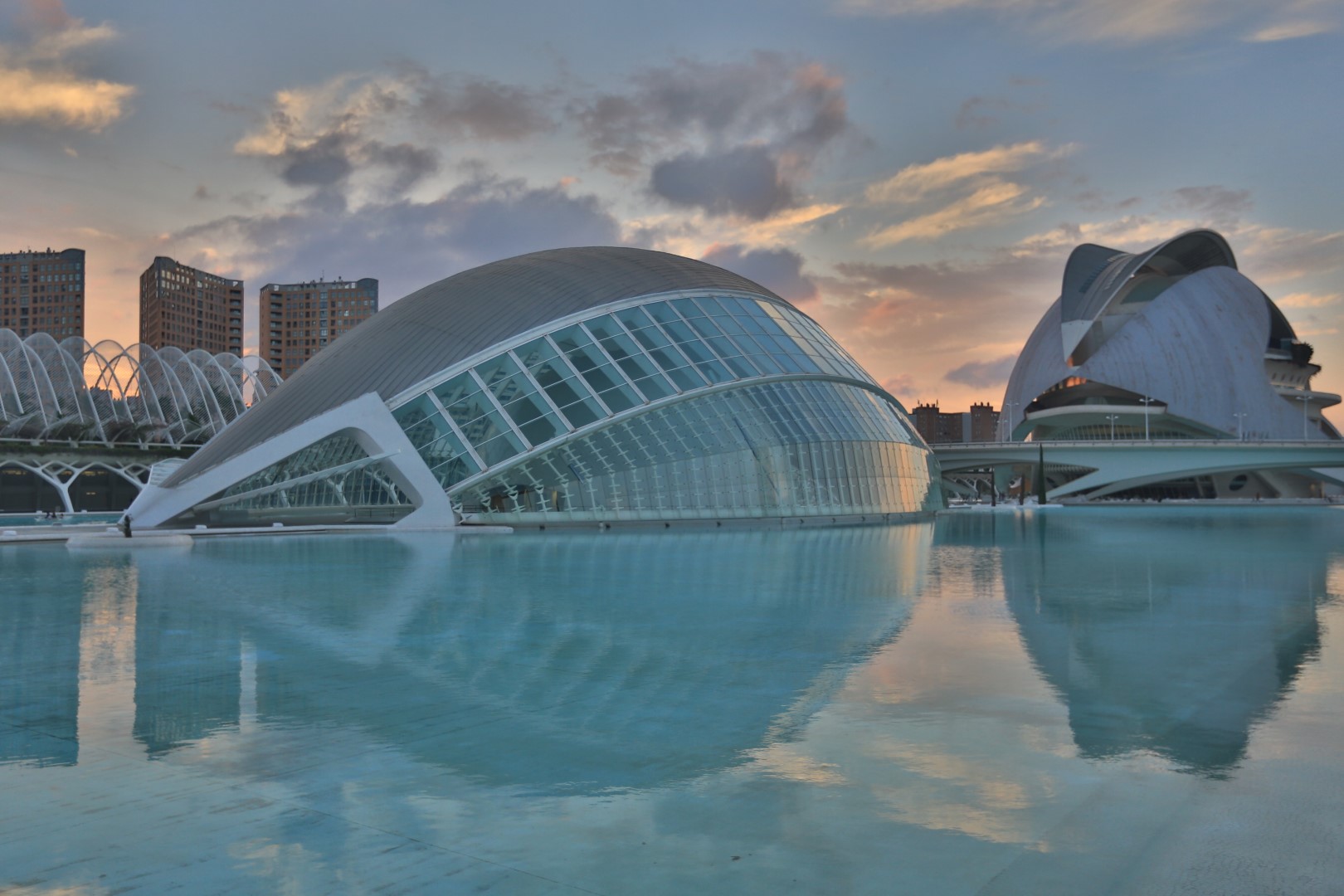 I recently took a great trip to the city of Valencia and spent just one (very full) day even though it was a breakneck paced trip I enjoyed it so much that I would actually recommend it especially if you only have a limited amount of time on your Spanish adventure.   I went with an organized group with “Barcelona Trips” who provided a comfortable bus and a half organized/half free time day for really low cost (35 euros).   I don’t usually do organized trips but this was nice because the bus left at 9AM (arrived in Valencia at 2:30) and then left Valencia at 2:00 AM and arrived in BCN at 6:00AM.

Valencia is a city of about 800,000 people that lies 3 hours south of Barcelona by train and has a distinctly different cultural vibe than Barcelona.   One of it’s claims to fame is that it is the birthplace of the dish Paella – that’s a pretty big deal if you are a foodie and a reason in itself to visit the city, however, it’s hardly the only reason to visit.

“The City of Arts and Sciences” Is actually not a city but is a section of Valencia with amazing architecture unique in all of Europe and/or anywhere I’ve ever been.  It’s hard to describe with words so I will let the pictures do the talking.    The buildings house museums, theaters and and aquarium that in my opinion is the best aquarium I have ever visited.

You can see from the pictures that the design is as if its from outer space.   The set of buildings, pools and outdoor walking area/parks covers the area of a very small city (which is why it may be named as it is).  I found it so unique because it doesn’t feel like any other “take” on modern architecture that I have visited before.  I feel like many modern cities are moving in a direction that feels to me to be more of a “Blade runner’ style of almost computer generated shapes with lots of metal and shiny glass.   I found the  white and the blue, combined with clear glass (of course which reflects but it’s not mirrored)  to be radically different than anything I have seen in other places.  In addition since all of the buildings were designed together there is a thematic consistency not often found in big cities where each modern building is a work to itself.  Lastly, for me, these buildings seem to be a bit of a throwback to ideas of the “space future” from the last century (the buildings were actually started in the 1990’s and completed in the early 2000’s).   I actually think that they are cool enough to stand the test of time but it just feels like they are from a style which isn’t going to be popping up any place in the near future.

Oceanogaficis a gorgeous aquarium and learning center committed to ocean research and education.  Even though it was a crowded Saturday for our visit I still found it peaceful.  The giant walk-through shark exhibit is a place where I personally could spend hours and in fact, one really cool thing is that they have a children’s program where the kids can sleep in the glass tunnel with sharks and giant fish swimming all around them.   If only I was a kid!  The also have beluga whales in a giant exhibit.  I know that some people may question the idea of aquariums and beluga whales, however, the whales actually had a baby in captivity which is a sign that the animals are happy and the mission of the facility is truly a positive one, I felt comfortable that they were keeping the interests of all of the sea life in mind.

Old Town Valencia is the other “Main draw” of Valencia.  It feels very different than Barcelona.  The streets are twistier and it feels like more of a maze or maybe a different kind of maze.  One of the most marked things for me is how prolific street are is in Valencia.   I am not sure how it happened but I managed to forget to take my camera out for almost my entire evening of walking around staring at cool murals all over the streets!  In fact I just have this one picture but imagine that there are hundreds of street paintings such as this one all over the place!

Aside from the Paella restaurants Valencia is a bit of a foodie paradise.   The old city seems to be half populated by restaurants and bars offering extremely affordable “Menu Del Noche”.   We settled on a Spanish fusion place and the food was delicious.  I saw enough enticing looking places that I know I could stay there an entire week an not get bored with the food.

I’m out of time as usual and I feel as if I haven’t described the experience of Valencia so well.   For me The City of Arts and Sciences alone makes it well worth the trip for it’s unique style but there really is just as much if not more to Old Valencia.   I love Barcelona but I can honestly say that I would be hard pressed if someone said “I have one day only to visit one of the two cities, what should I do” and the reason maybe I say that is that in Valencia you can accomplish a lot in a little amount of time.

Regardless of how you go, I highly recommend that you go!   Until next time stay Curious!