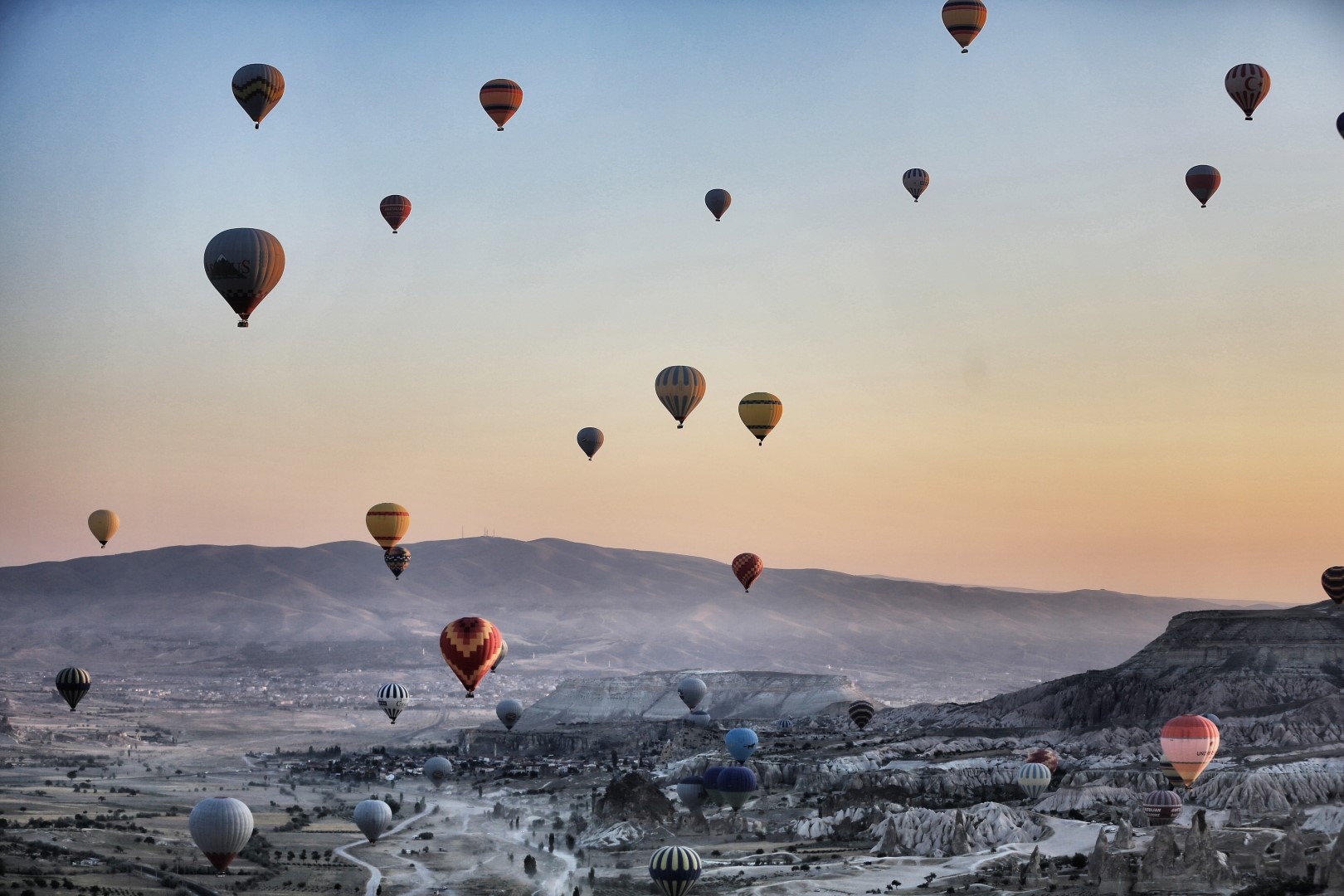 It wasn’t even on any list.  Never heard of it.  We had not even really planned on going to Turkey, it just turned out to be the place that was the easiest, most interesting and non-dangerous place to fly from Madagascar.

Sadly Katie couldn’t be with me for this part of the Turkey trip – we did get to spend an amazing 8 days on a boat in the bluest water of the Turkish waters of the Mediterranean – maybe that will make it to another post – but the place that has been so magical for me is a place called Cappadocia and it looks like something out of a movie set from Star wars.  Cappodocia is famous for “fairy chimneys” – an extremely odd rock formation that is the result of layers of volcanic material being eroded by wind and weather.  The result is other worldly.

But there’s a lot more hidden in there ……

The magic isn’t just in the landscape here – it’s in the fact that people lived in these cliffs and caves for centuries.  Everywhere you look there are caves and they are obviously man made.  The history here is eye popping as well.  In this big world there is too much history to know but this part is really news to me.  Turkey was a hotbed of early Christianity.  It is here in Cappadocia that the idea of a Christian monk lifestyle first came to order.   These cave houses are mingeled with cave churches –  Churches like the following represent probably 10% of the caves.  Absolutely nuts!

the population of this area was entirely early Christians starting around the 3rd century AD.   They used the caves both as protection and a ‘cool’ place to live, but also to hide from persecution and being killed and a place to worship.

The architecture is radical.  It’s hard to comprehend carving the churches out of stone high atop these spires but they made them all over the place.  None of the guides that I asked had a very good idea of how much time it took to care one of these out.  It couldn’t have been easy.  Talk about dedication.

Nowadays the caves are used as hotels but people lived in them until the 1950s.  I am pretty sure that people are still living in some of them although a guide told me that it was made illegal in the early 60’s because they were considered dangerous.  These guys have a store inside one of them about 2 miles into the hiking trail.  The great thing is that they keep a constant temperature around 68 degrees – which is important when it’s 100 in the summer and snowy in the winter

There’s a lot of weight in the history here – I won’t go to far in depth but I found it really amazing that there was a population swap between Greece and Turkey in the middle of last century – all of the Christians in Turkey were sent to Greece, all of the Muslims in Greece to Turkey.  Non-optional but mainly non-violent.  Turkey became and is to date about 99%  Muslim.  It is pretty fantastic that the Muslims preserved all of these churches without destroying them and now you can visit and marvel.

Wrap it up with a photo dump – Cappadocia is famous for balloon flights – while it was an expensive tour (much more than we usually pay for things like this) I have to say it was well worth it and leave you with the photos from my sunrise balloon ride over this magical place. — also there is a photo gallery at the bottom.  And the adventure continues!

4 thoughts on “Straight up magic in Cappadocia, Turkey”