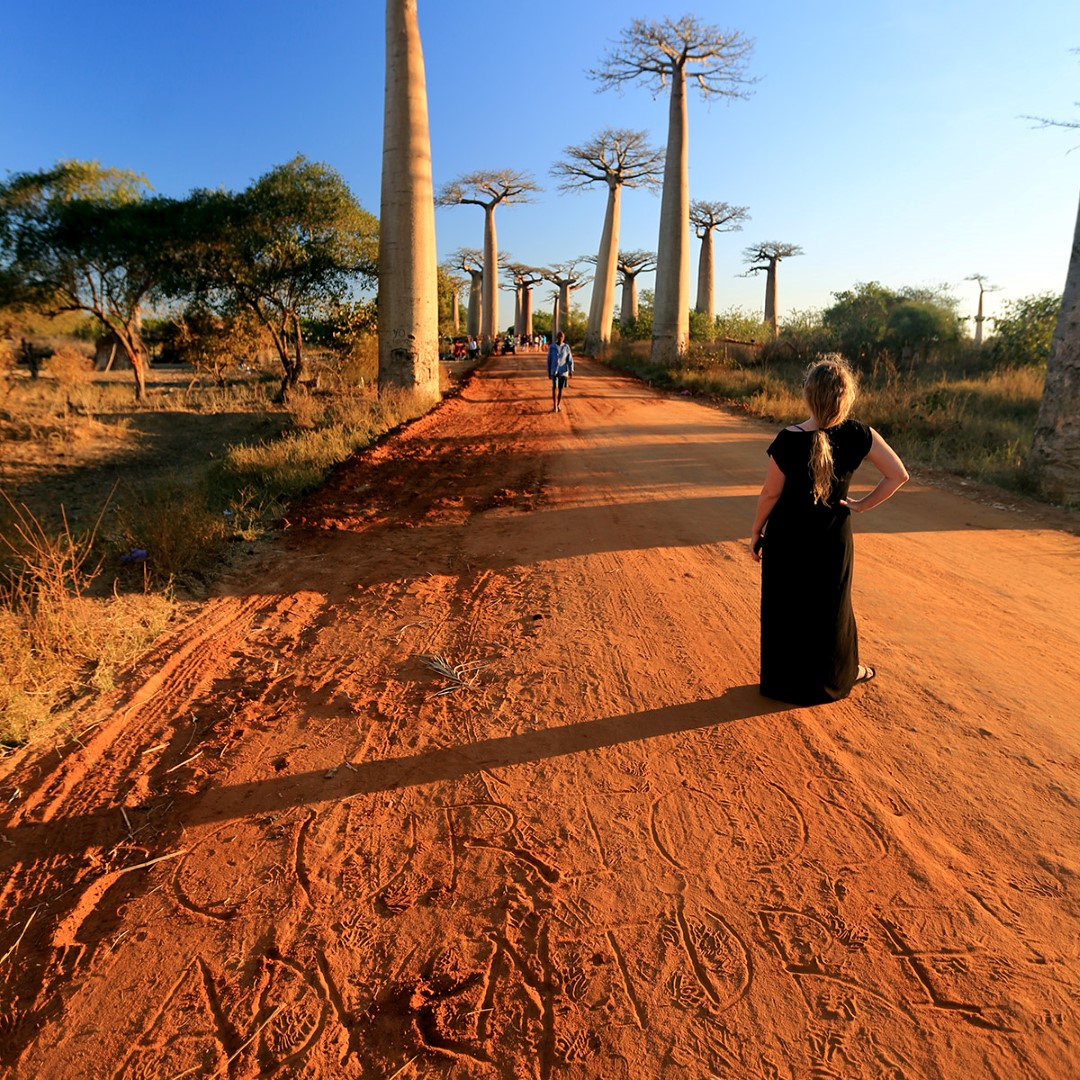 Let’s just start with this.  In Madagascar the cattle are Zebu.  They aren’t cows.  They look roughly like cows – when you very first see them you might think that they are cows – same color variations, same size – very easy to mistake … for a second …. then you realize that they have a hump, and horns that point up in the air.  In Mada they replace all duties of a cow – and they taste a lot better (but the milk tastes worse) …

Of course then there is the detail that you see them within 60 seconds of exiting the international airport – except you don’t just see them distantly in a field, you see them pulling a wooden “Zebu-cart” full of hay on one of the main roads leaving the airport which is just slightly outside of the multi-million person metropolis of Tana.  Zebus don’t live anywhere else on the planet.

At this point you know you have stepped into another zone.  Actually, scratch that.  The realization of ‘other zone-ness’ probably took place the minute that you entered the “customs” area at Tana airport and encoutered at least a handful of people holding up arrival signs with names of tourists – you know – the kind that normally you don’t see until you are 30 minutes past the customs process – that area of the airport usually heavily cordoned off by security with state of the art cameras hitting you at all angles and generally loaded with the most up to date technology found in a country.  Yes, that same ‘zone’ has been comprised by guys in t-shirts hawking rides.  Sure, you have to get your passport stamped, but it’s more melee than anything else.   I don’t actually remember if there was a computer there …..

Madagscar is by far the most ‘different’ place that we have visited.   I have blogged very much about how other places have surprised me by being more familiar/modern/whatever than I expected.  Madagascar is possibly the only place that is the opposite.  It’s notable that this is the first place where our international phone service with 120 countries of unlimited text and .20 cents a minute air … is not valid.  Text and talk will cost us more than some months of this trip should we break out of airplane mode.   While cell phones are present just about everywhere this is the first place where not just about everyone has one – where it still seems that most people do not (to go along with thier lack of cars – and frequent lack of TV among other things).

Just to drive the point home further – there is a species of tree called the Boabab.  They are gorgeous, amazing trees which look slightly cartoonish.  There are 7 types in the world.  6 of these only exist in Madagascar.  Take a look at this:

So, a trip to Madagascar is part trip back in time but more a trip to a forked off past which is now somewhat reconnecting to the rest of the world.  For example, here in Madagscar just about every person has at some point in the near past ridden to a location on a zebu cart (think covered wagon – without the cover) – or – just as likely – walked 10 miles to get some stuff at the market for the week and carried it back on your head

Let me back up – you may not know a thing about Madagascar aside from the fact there there was an animated movie about it and that it featured a lemur.   Let me give you a quick blip.  Madagascar looks like (and is) a big island off of the east coast of Africa, however, it’s a nation.  It’s the 3rd largest nation by geography in the continent of Africa.   What is really interesting about Madagascar is that it has all types of species of both plants and animals that live only in Madagascar – out of the entire world there are species that just don’t exist any place else and they are in some cases (like the Zebu is for the cow) a substitute version of what the rest of the world has.

Let me explain that in simple terms – going to Madagascar is the only way on the planet to see many of the things that we got to see in Madagascar.   Madagascar is biologically different than any place in the world.   But the biology is what I read about and came to see.  I wanted to see lemurs.  They are primates but they are cuter and furrier than monkeys.  They are fluffy.

This isn’t subjective, neither is the fact that while monkeys of some sort live in hundreds of other countries in the world, lemurs only live in Madagscar.   So, more or less, I stated it early on – I came here to sleep in a pile of lemurs (they sleep in piles).   Guess what?   I more or less met that goal!!! Well, I didn’t actually get to sleep in the pile – but I did get to hold them as well as seeing dozens of them in their natural habitats and it was actually better and more vivid than I had even joked about.  Let me say this.  Lemurs kick ass – but I digress.

The rest of Madagascar has been pretty mind boggling.   Good, amazing, weird and just as different from anything in our comfort zone as lemurs and zebus are different from cows and monkeys. Out of comfort zone and frankly frequently uncomfortable.    Let me tell you a little bit more in a bit of word and picture painting.   What follows is just a stream of consciousness to give a flavor – let’s see how that goes.  Don’t look for complete sentences or thoughts!

Most of the roads in Madagascar are not paved.  In addition most likely 90% of the roads have no ‘straight’ section of maybe more than 200 meters.   There are something like 4 paved highways that connect a few major parts of the country and calling them paved is a gift.   Every one of them has dozens of bridges and 95% of the bridges have one lane.  The RN7 which considered the most user-friendly to traverse the country has at minimum 1.5 hours of complete potholed surface.  Like a war zone.

The rest of the country – including cities with hundreds of thousands of people – are connected by journeyways which are ‘roads’ in name only.   Sure, they are the places where vans, buses, bicycles and zebu carts traverse

(all together most of the time) ….  – but they are as far from an American “gravel” road as and American “gravel road” is to an American “Freeway”.   We read in advance that the roads are slow and difficult.   This is like calling mount Everest a tough place to hike.   No.  Really.   We had a three day excursion.  It was 50 Miles from a town on a river that we reached in a canoe – please note – the canoe pictured in not a tourist-toy.    These canoes are still 100% in use on rivers in Madagascar to fish, to travel, to get to market and to otherwise navigate rivers which access significant numbers of villages … yes.

After 3 days on the river – passing village after village which were at minimum 15 miles from a paved road – we were picked up by Zebu carts – again – the way that Malagasy travel with complete regularity.   Again – this isn’t a tourist toy – we were going local …..

A 4×4 met us 30 minutes across dirt tracks later when we arrived in a village.   We switched from old world to new world and switched from the local transport to the tourist taxi (4×4’s belong to the luxury class).  Still, The next 50 miles took 6 hours to drive.  I was not aware that a vehicle could actually drive across the types of rock formations that we crossed in places.   The 4×4 was ferried across 2 rivers on barges.  over a million people in total lived in the area that could only be accessed by these barges and the dirt roads that they are connected by…..

For lack of time I am breaking off this post into a “part I” which is this but I will leave you with a series of images of the people of Madagascar and one lovely thought – there isn’t a single McDonald’s in Madagascar.  To me that’s a beautiful thing.   Madagscar needs more explanation than I have the time to complete at the minute – check back for part two and enjoy some photos of some of the people that we have met along the way ….. 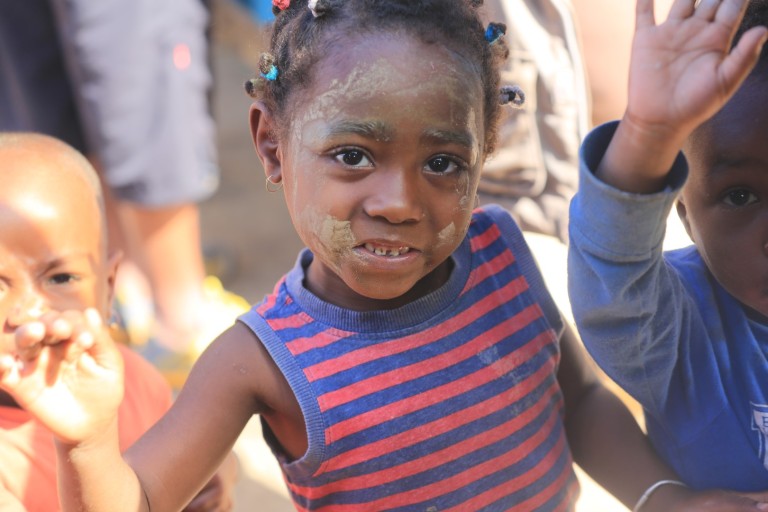 9 thoughts on “Madagascar Part 1 – everything is different – even the cows.”