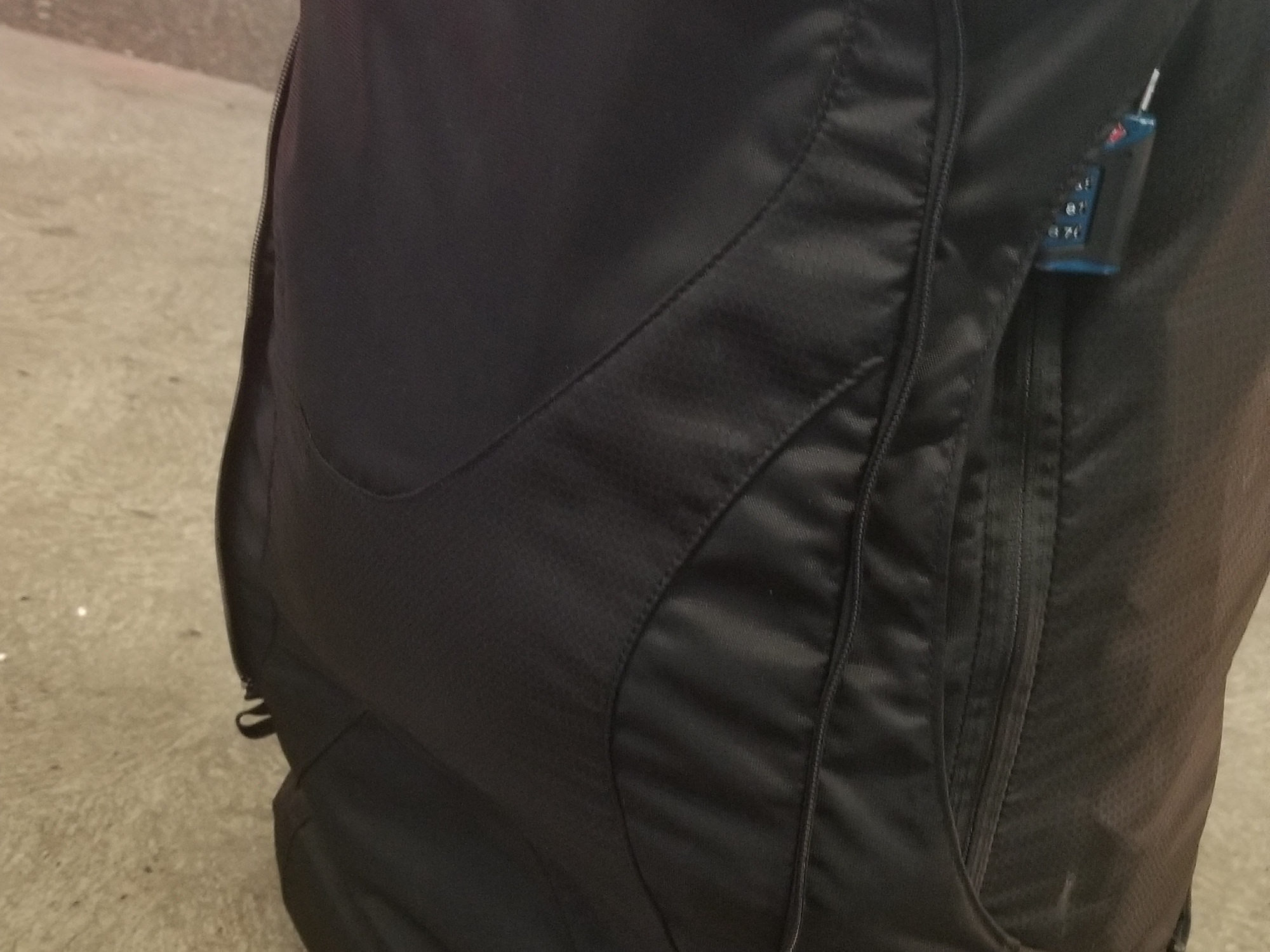 I am unhappy to report today my worst travel story in four years and over a hundred flights. I would like to say I will never fly Lufthansa again and I recommend against it.

Yesterday I flew business class from Barcelona to lax. I was traveling to apply for a residence visa in Spain and this needs to be done in LA. There are certain original, signed documents which needed to be produced in Spain and brought to the US. I stupidly put them in my luggage.

In all of my travels I have had bags get lost and returned. I consider this to be normal. It’s annoying when it happens. I may be oblivious but I have never heard of someone having luggage actually stolen. I especially think with huge international, modern airports with security and systems that – well, it was stupid. I didn’t have a particular place to carry them but again, I just would never think about my luggage being taken apart and stolen. Especially not just a backpack with some nice shoes, a shiet and these documents which was firmly, professionally attached to the main bag with a very solid zipper. A process which takes even me a bit of effort to detatch.

I got to baggage claim in LAX and my heart stopped. I knew my bag but the attached backpack was a gone. I knew without question it had been securely fastened when I checked it. I grabbed the bag and nothing was ripped or torn. The half of the zipper on the face for the bag – probably 2 feet of zipper – was in perfect condition. No broken teeth, etc. My heart dropped. It had to have been purposely removed.  You can see the zipper, imagine that there was a backpack attached. 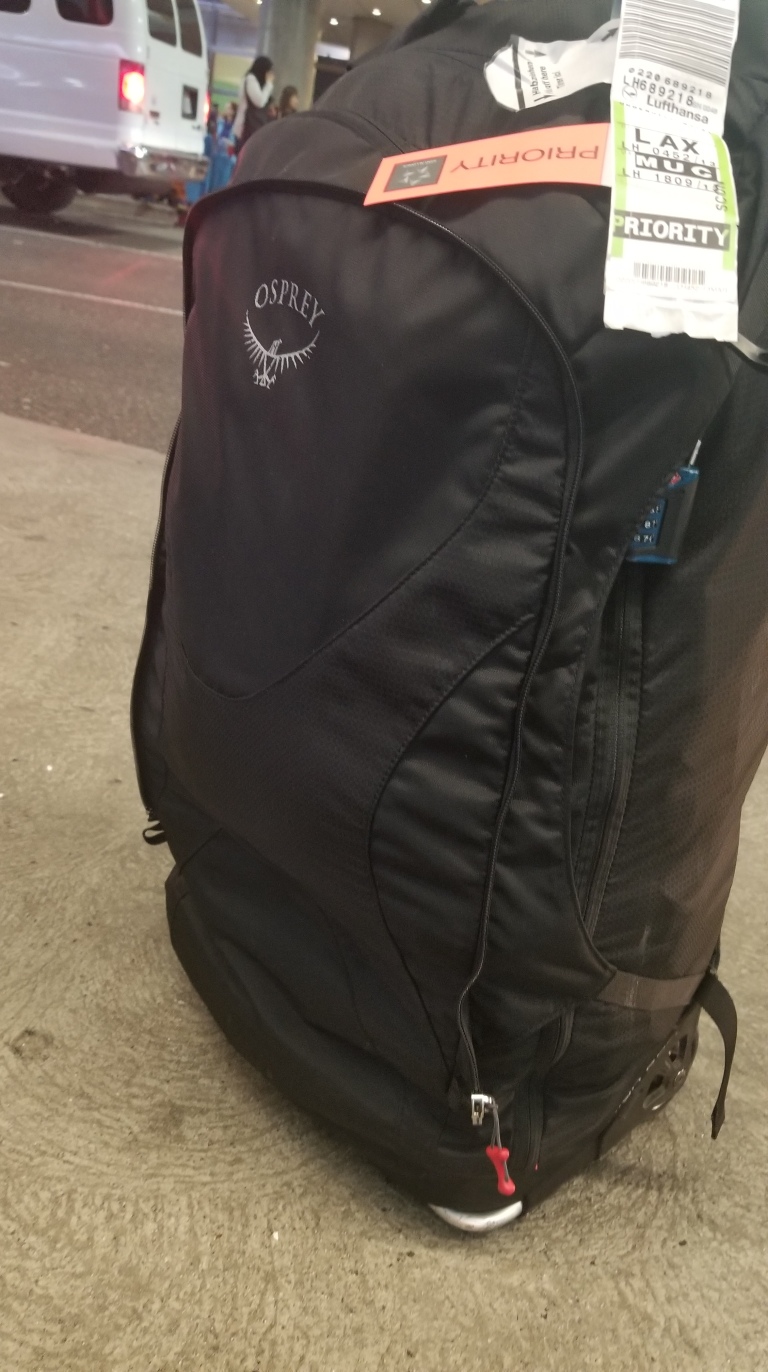 I waited, would it be in a bin? Maybe it had been removed and put aside. All the luggage was done and nothing.

This is where I began my encounter with a near total lack of concern from everyone I talked to. “file a claim with luggage” is what the reps in the area by the machine. This of course required me to clear customs so by leaving this area and give up hope it might show up but I did this.

The claims people weren’t even actually from Lufthansa. They were contacted. The girl acted as if she thought it was serious but refused to write “stolen”. She didn’t even ask me to describe the bag well I realized later. She wrote “attached bag lost, important docs inside”. That was all. She told me to talk to the people in the Lufthansa office upstairs.

There wasnt an actual office. Only the checkin staff. The first woman was absolutely indifferent and unconcerned. Rude. I asked for a manager and he told me that they could do nothing as long as I filled out the form with the contracted bag person which I had. He told me to contact Lufthansa customer service.

I did this and I reached a call center I Manila (the woman immediately introduced herself as [her name] in Manila. I understand the use of call centers but the preconceived notion of call center service as being unhelpful, unable to provide anything meaningful applied completely and at some point to add insult to it I was disconnected and she hadn’t gotten a call back number.

I called back and got an honestly much more sympathetic person who was much more detailed but she told me that, a few hours after I reported it that it was “case closed” with them and she could send me 200 euros. It wasn’t even like she made believe that my bag would be looked for. Just “here you go, we have an environment where if someone steals your stuff we pay you $200 and end it”.

There is zero left to do with the company. It’s a black box. It wasn’t even internally reported or admitted as a theft. There is no document that says to anyone that someone in either Barcelona, Munich or LAX is stealing bags.

I have to emphasize that my bag is non-descript black. It’s high quality but low bling. Also, the process of removing the second bag is something that someone needs to know what they are doing. The third comment, this was a low payoff theft. In other words there was zero apparent high value that would make it a target. It happened to be absolutely invaluable to me but those docs are worthless for anyone else. A rental contract with signatures, a report from a Spanish doctor and an original stamped paper from my Spanish insurance company. Nothing. And they will be thrown out.

And so it’s clear, Lufthansa offers an environment where it’s worthwhile to take a worthless bag because it’s known that there is zero point zero risk.

I absolutely recommend flying with anyone who else if at all possible. Sure, maybe it was just random bad luck. I doubt it. It doesn’t make any sense outside of the idea that the bag thieves inside or their organization know that nothing will happen.

Please note that I am publishing this as both a warning to other travelers but also maybe as a last ditch effort to get Lufthansa to pay even a tiny bit more attention to this.  I truly believe that a situation like this deserves some form of report to be a made and follow up at the baggage services otherwise there is zero incentive for employees to not steal